Wishing you an amazing 2015

A big thank you to everyone who has read my blog this year and also for the lovely comments on my posts and in emails :)

WISHING YOU AN AMAZING 2015, Natasha 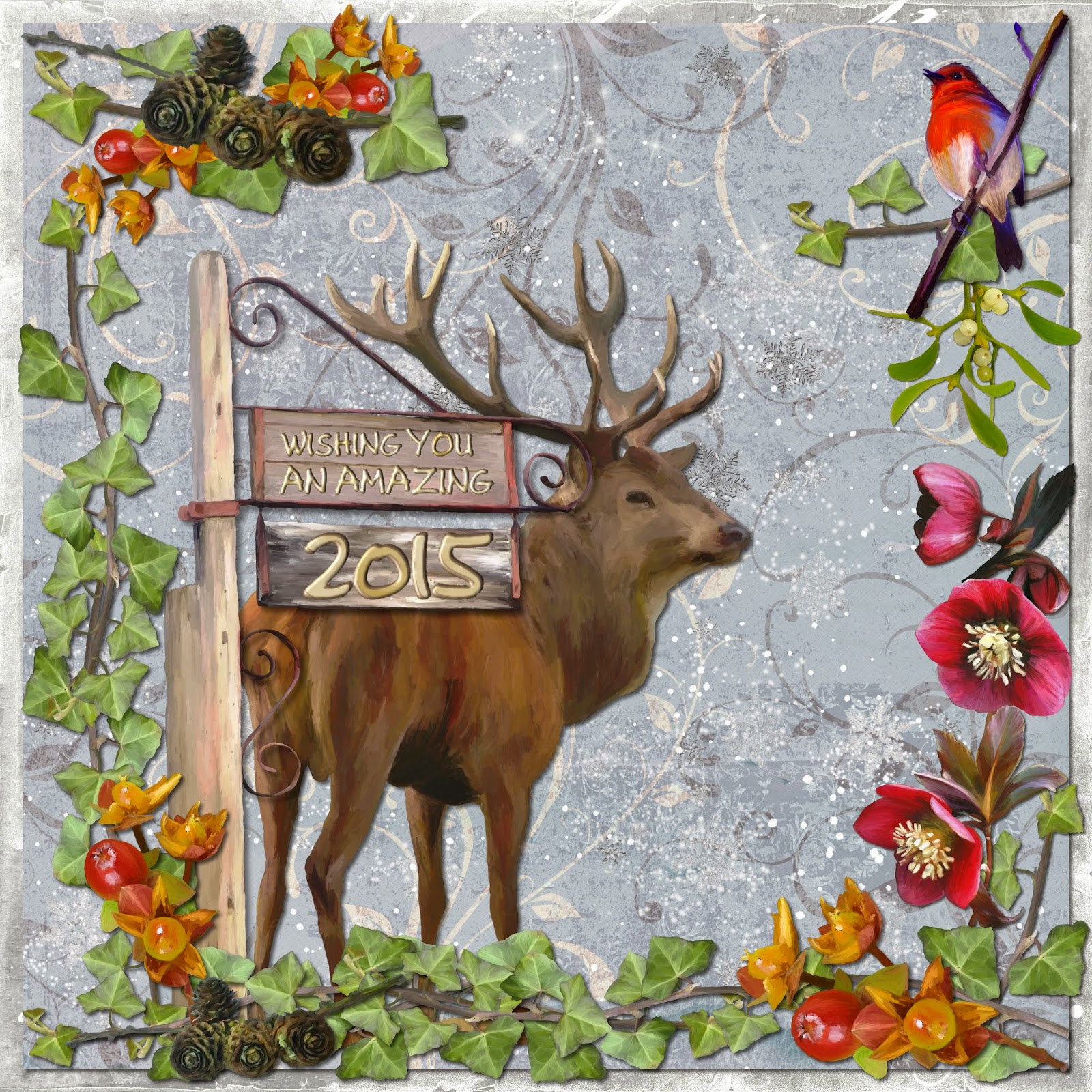 Created with the beautiful kit Mistletoe and Wine by DigiFiddle Designs.
Take a look at DigiFiddles Website and the Gallery for lovely layouts and inspiration.

Hi, as you can see this weeks log post has a definite Christmas feel to it! I couldn't resist with the Christmas hat! 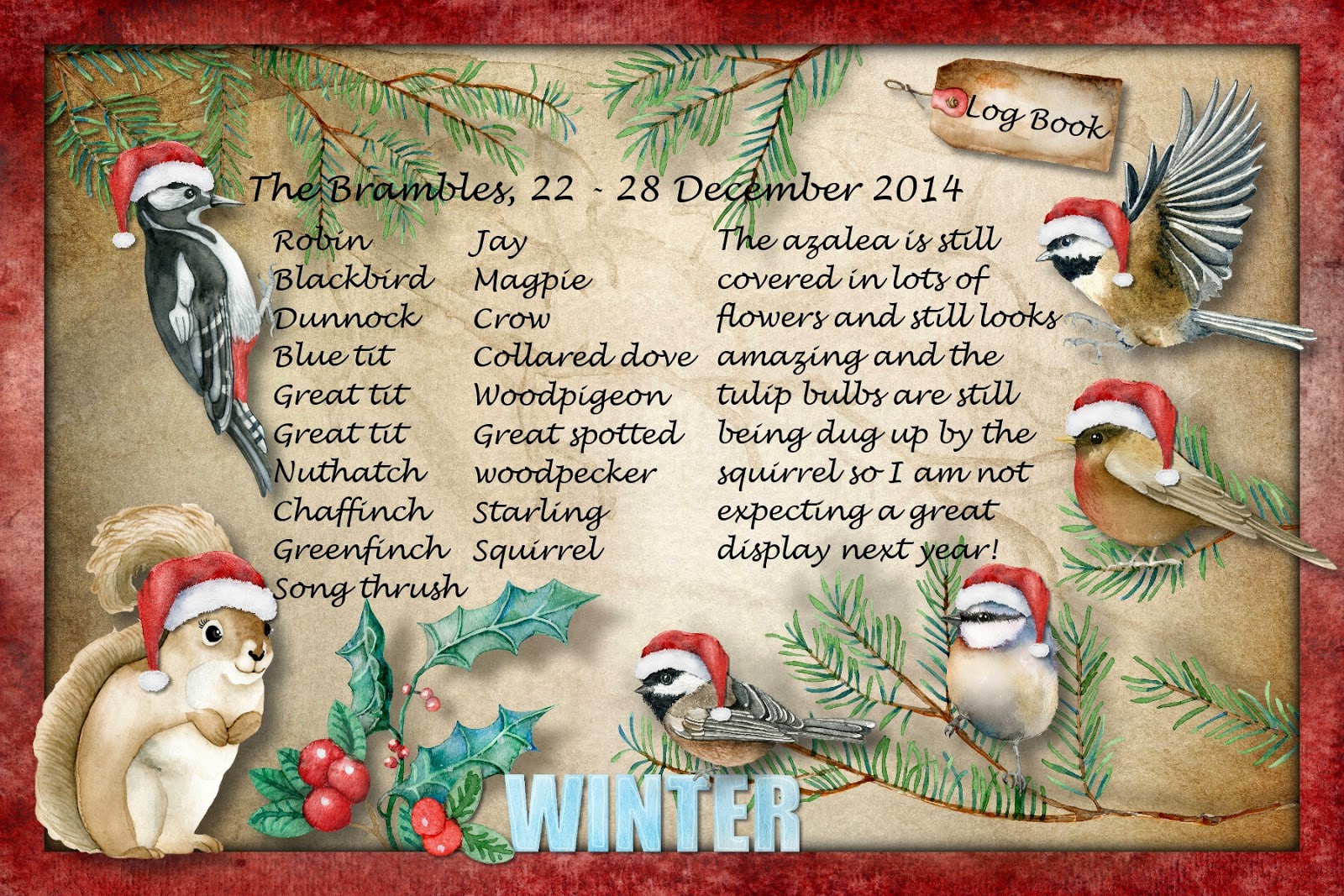 It's been a very average week in the garden and as I've noted above the squirrel is still messing with my tulip bulbs! I'm sure they are really tasty and that the recently turned soil is also great for burying pine cones in, but... Oh well. I guess I'd not have it any other way!

I've noticed that there have been lots more male peckers around recently. It used to be mainly females but there is often two or three males around at the same time. Sometimes they are quite funny. One will be on the nut hanger and the other will hide the far side of the trunk of the pieris and keep poking its head around to see it the other is still there. I just can't believe that the other pecker hasn't really seen it. They do get territorial and chase each other off. I still think the garden is the territory of a female though.

Also this week there has often been two nuthatches in at the same time and they also like to chase each other! And it's the usual situation with the blackbirds and song thrush!!!

As it's been an average week there isn't really much else to report, so it's time to say that this is all for this year. Have a great New Year and I will be back in 2015 with my next post, Natasha :)

The Brambles Bird and Wildlife Awards 2014

Hello, and welcome to The Brambles Birds and Wildlife Awards 2014!

This year there are the following award categories:


It's been a great year in the garden and all the visitors provide endless entertainment in all sorts of ways. So this year I decided to have an awards ceremony to celebrate some of their best moments!

The winner of "Sports Personality of the Year" goes to "The Real Mr Black", for his outstanding performance in goal. He defends his bird food like no other bird in the garden. He is always there making sure that no other blackbird or song thrush gets a look in. He chases off any competitor instantly. An amazing performance that is ongoing from dawn until dusk!

Miss "Brambles" goes to none other than the sleek and beautiful Nutty the Hatch. This beautiful bird with it's stunning streak of black is also an amazing gymnast, hanging upside down from any feeder and bending its body at right angles. This bird really catches the eye when it visits the garden.

Parents of the Year goes to the Blue Tit parents that lived in the eves of my neighbour's. The little birds accessed their nest via a small gap between two soffits. However, whilst one of the pair darted in and out, no trouble at all, the other had real problems. Sometimes it took the little bird several minutes to get in (or about half an hour in one case), but it never gave up and the baby birds always got their grubs. How about that for determination!


The winner of "Best Album" goes to Robby Redbreast, with his album Dawn till Dusk. It doesn't matter what time of the day it is Robby sings away in his instantly recognisable voice. He has a full daily repertoire that is a pleasure to listen to! Unfortunately Robby is a little camera shy and there are currently no photos of him.

The "Best Actor" award goes to Sid Squirrel for his role in "The Stolen Nut". The look of innocence whilst being caught red pawed is just amazing. His whole facial expression and body language, "wasn't me, really... it wasn't... What nut?" is so funny to watch. Let's remember a couple of iconic moments from the film!

That is it from this years awards. Thank you for joining me and I hope you've enjoyed this post with a little twist!

Who are the winners in your garden? Why not stop by the comments and share :)

Hi, it's Sunday again, although being Christmas holidays now for me I actually almost forgot it was Sunday. So I hope I don't forget over the next couple of weeks too, please excuse any late posts! 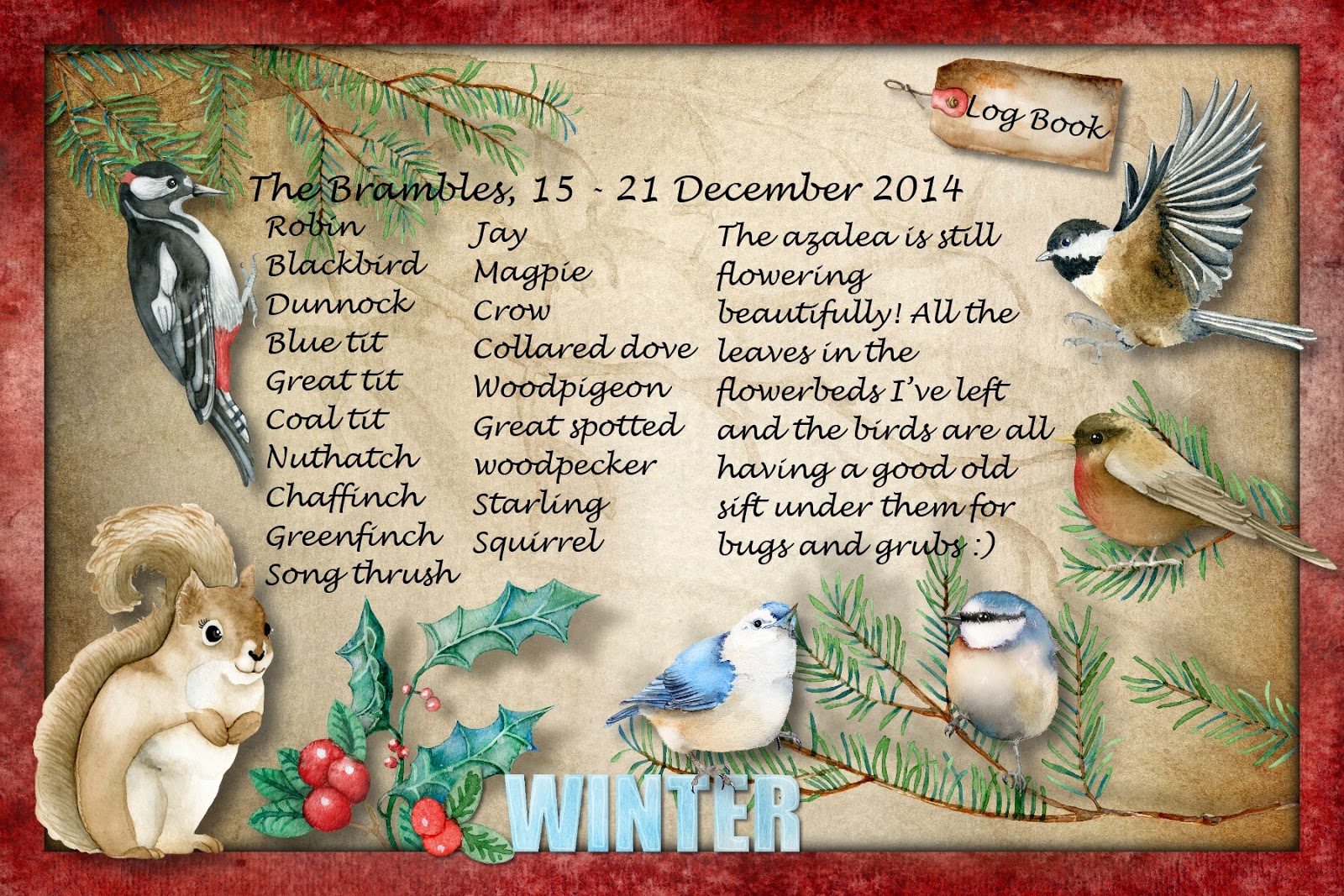 The starlings stopped by for a quick visit yesterday, so it's great to see that they are still around :)

The song thrush is still around too and has been working on its technique for being able to get a meal. It goes something like this. Mr Black does not like any other blackbirds or song thrush's. So the song thrush sits in the tree and waits until Mr Black is chasing away another blackbird and then nips in. However, it hasn't got its timing quite right, as before it's had a chance to eat anything Mr Black is back and chasing it away! The thrush is persistent though and has been able to get some grub!

And that is all for today.

If you've got any news to share from your garden or local area, please feel free to add a comment :)
See you next week, bye for now, Natasha

Hi, today's highlight was a quick visit from a few redwings. They stopped off to tuck into the berries on the holly tree :) What has been happening where you are? If you'd like to share please leave a comment :) Looking forward to reading them :) 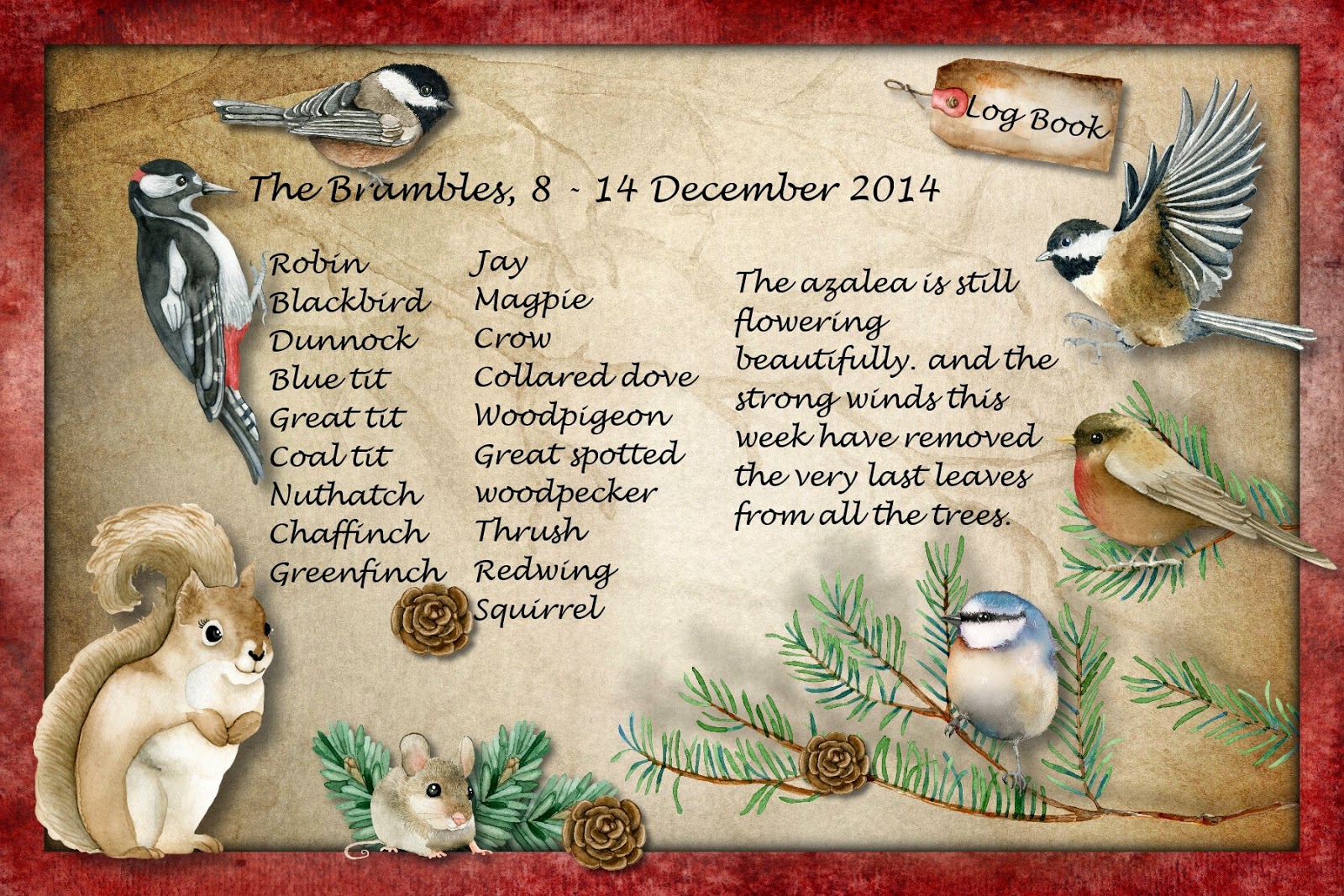 Every year the garden has been visited by redwings. The first winter here there were lots of them and by the end of their visit the holly tree that was covered in berries was totally bare! It was cold though, lots of snow too. Today's visit was just a quick one, but great to see them all the same.

I've shown a mouse on my log book today but I've not seen one for a long time. I am not sure what type they were that lived in the garden but they were tiny with big ears. I think either a wood or field mouse. Very cute ones!

I've seen lots of nuthatches this week and the thrush has been aroung too. The coal tits have had a good presence and I just love them, they are quite cheeky little birds I think!

This morning when I went out to feed there was a female chaffinch just sat in the snack shack, even though there was no food in there. Huddled right at the back. Even when I got really close to restock it didn't move for ages. Finally it flew off into the tree, I hope it is okay.

The bigger birds have been in more than ever. On the lawn yesterday there were about tewnty woodpigeons, the usual three crows, about 10 magpies and a couple of jays. I put some general bird seed on the lawn for them in the hope that they will eat that and not smaller bird food! But of course there is always one that is tucking into the songbird special!

And that brings me to the end of today's post. I'm back next week with more stories from The Brambles :) bye for now, Natasha.

Hi, So today I have some exciting news; well it is to me :) Also you'll see I've changed my log book design this month. The lovely kits used are by Createwings Designs. 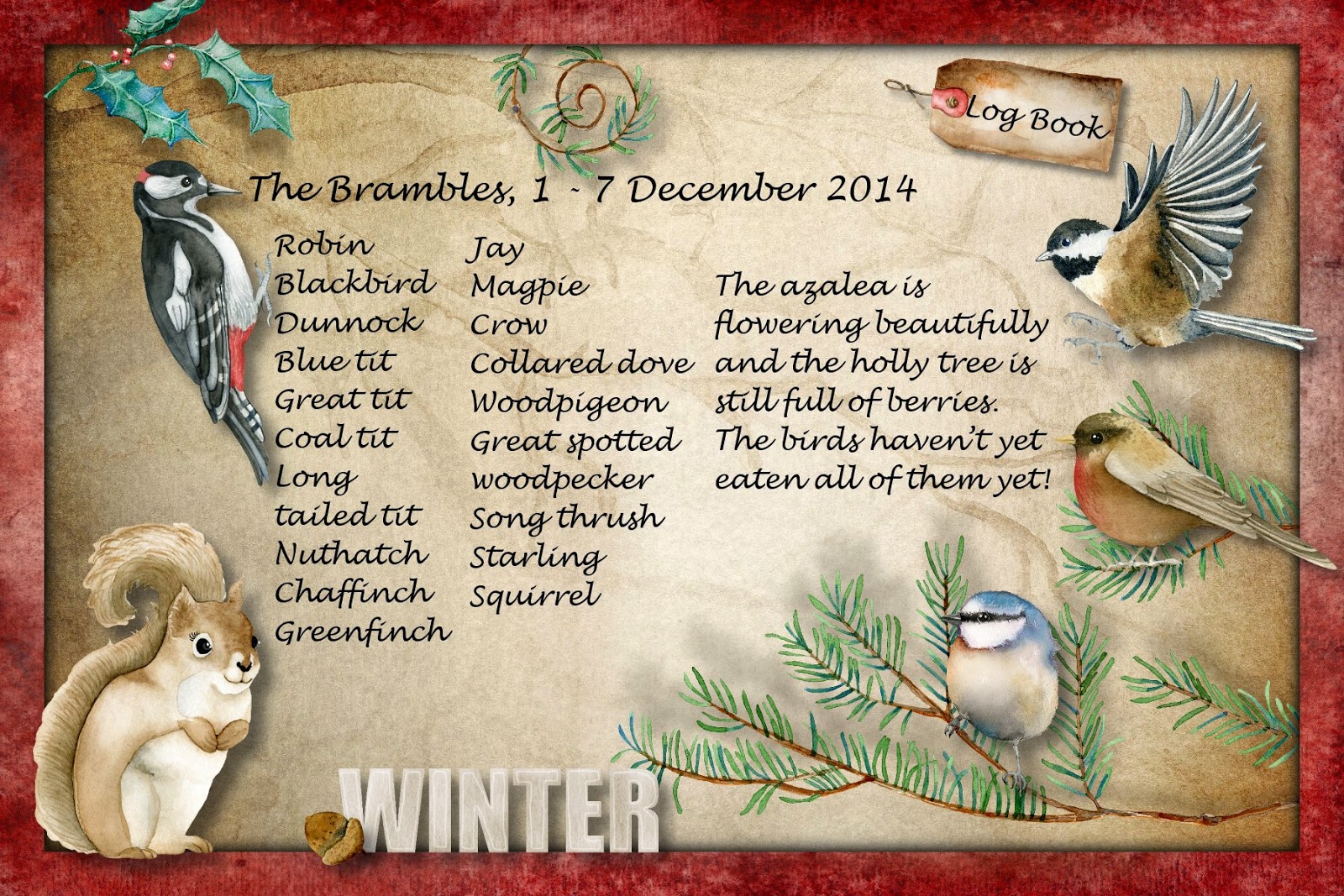 Today I walked into the kitchen and looked out on the back garden and thought, what are all those birds. It took me a few seconds to realise that they were starlings! And lots of them too. Somewhere between 15-20; I lost count. The only starling up to this point that I've seen in the garden was a baby one a couple of years ago. They seemed to be having a great time tucking into the food. The blackbird whose "turf" it is wasn't quite so keen. He seemed much happier after they had left! Anyway I am quite excited about this visit. Maybe they'll visit again, or maybe they were just passing through, I hope they will visit again.

So along with the "starling invasion" and the other blackbirds, Mr Black is having issues with a thrush. Second thing to be excited about this weekend. Thrush's do visit, but not all the time and even better this one was on the "patio" a lot outside the kitchen door. Some great views, no photos though.

A quick visit from the long tailed tits in the week was also great. They've not been spotted for a while, but I suspect they have been around. They stop by so quickly that they are easy to miss.

Lot's of all the usual visitors too :)

Oh and yes, I nearly forgot. The tulip bulbs I planted, I found half of them spread around the garden. The squirrel had taken it upon itself to dig them up, but at least they weren't nibbled!