Hello :) I hope that everyone is enjoying their wildlife closer to home and the changing seasons. 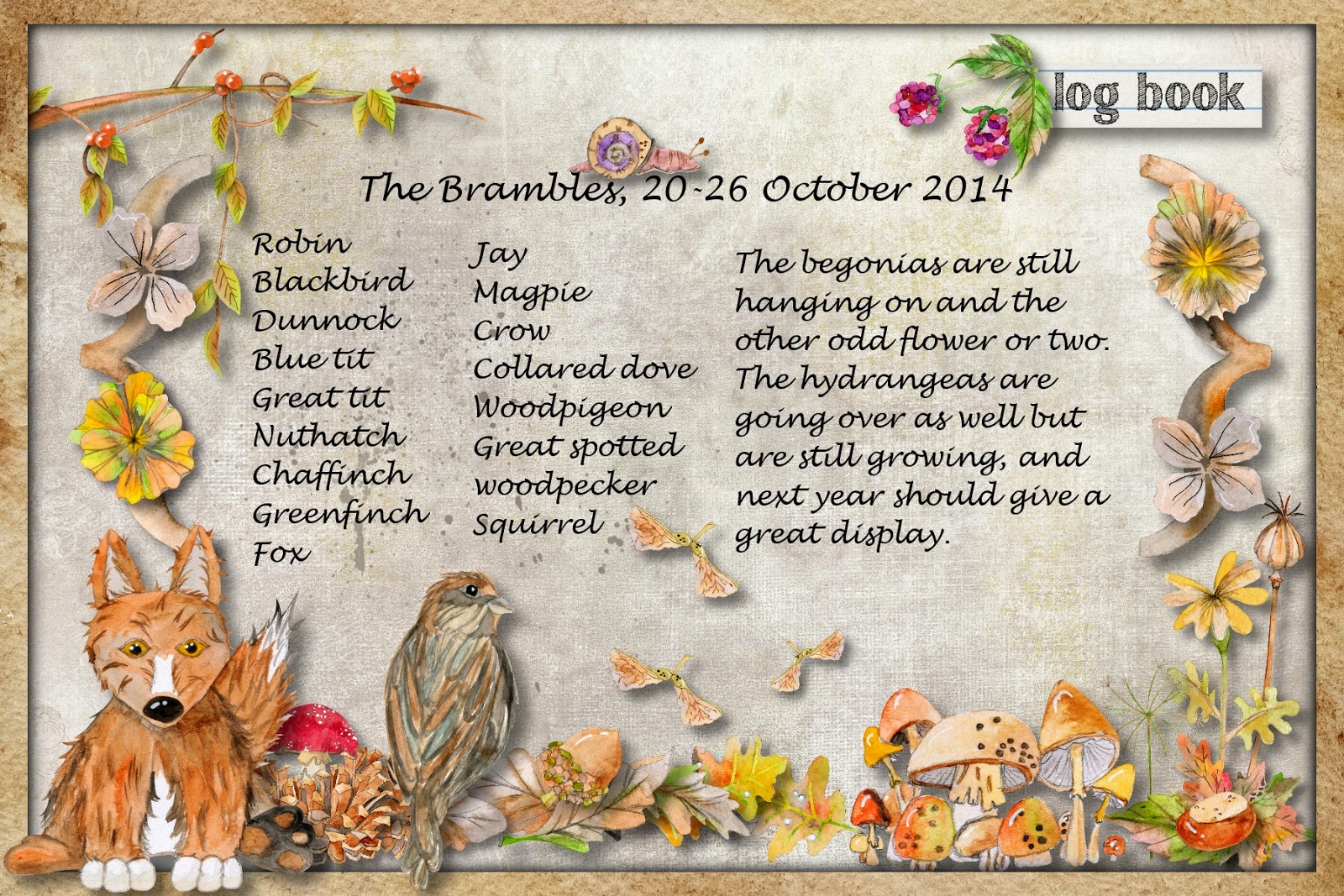 This week I didn't just see the evidence of a fox, I didn't just hear a fox but I saw two foxes! I awoke to a noise from outside. Not too disturbing, but close. When I looked out the window I could see two foxes on the front lawn having a tussle. I am not sure how friendly it was! They had triggered the outside light. One decided it had, had enough so moved away and the other followed behind. But they were both still weary of each other. Then the light went off and that was that!

Otherwise not too much to say about the garden. The "Mob" have been in. There were about seven of them on the lawn yesterday morning. They seem to have developed a taste for fat block too, so that is lasting no time at all. I do like magpies, but they are costing me a fortune!!!

The crows have been around quite a lot too. They are so big. There are often three of them on the lawn and even a magpie looks quite small in comparison. They are impressive birds really. Very skittish though.

And I don't really need to say this, but the squirrels are still digging up the garden :)

Hello there :) It's time to report on this weeks garden goings on! And as ever it has been busy, busy, busy! 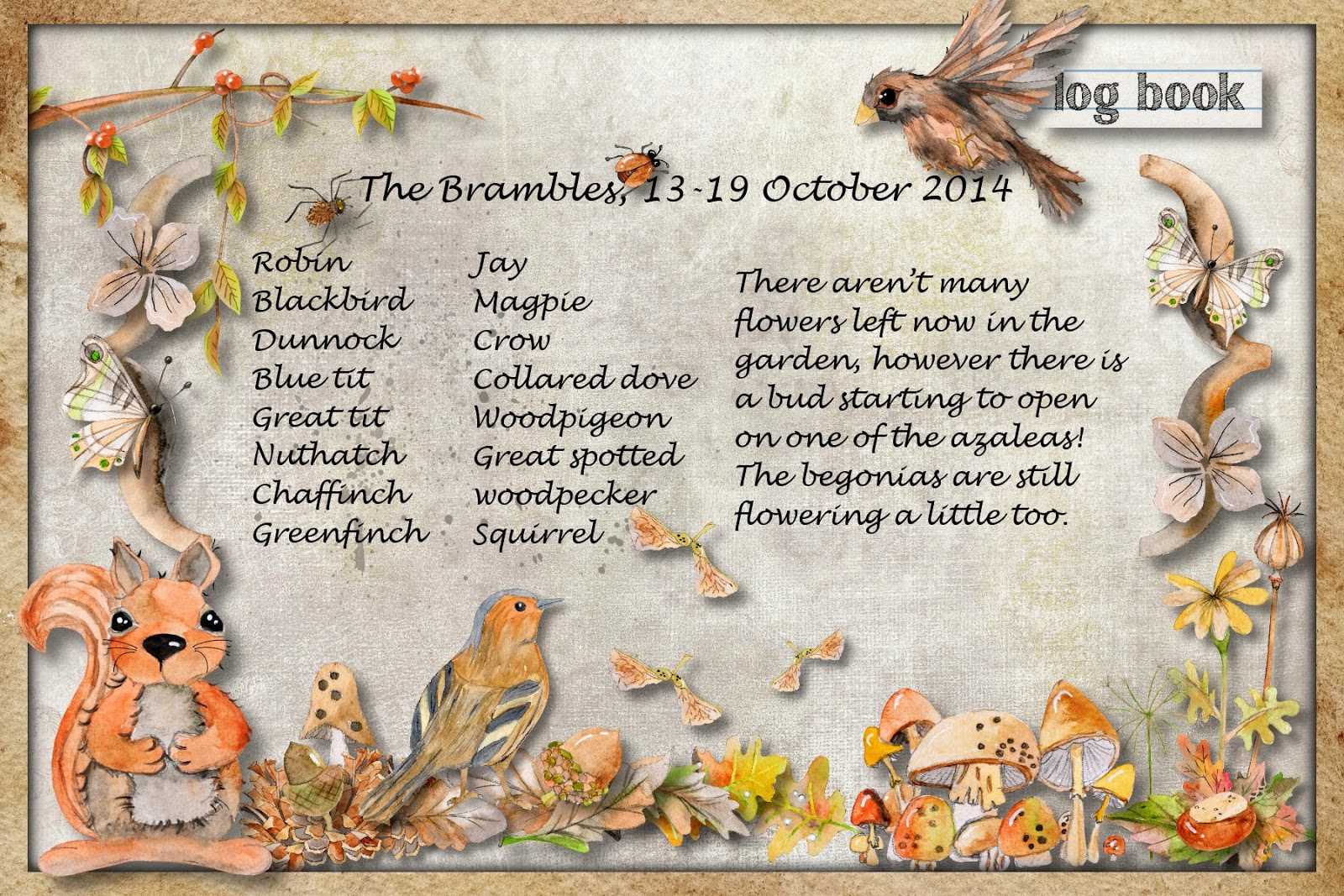 Whilst preparing dinner today it was all go. Four blackbirds all wanting a bath. Next there was a blue tit bathing with a Mrs chaffinch watching. The blue tit was barely out before the chaffinch was in. Next thing the blue tit is back in and they are bathing together, now that is not quite a first, but a first for two different species. There has been multiple blue tit bathing before now. And it wasn't the biggest of water containers that they were in either, so there was a bit of collision going on! It didn't end there for the bathing either. The blackbirds were back a few more times later!!!

Whilst out doing a little cutting back in the garden we came across a couple of blackbirds hiding out in one of the conifers. They didn't fly off either. Just stayed where they were :)

Something has been playing with the rubber ducks from the pond again this week. This morning two of the three were on the lawn! I can only assume it is the fox. I need a night time camera, so I can see what is going on!

I'm sure that earlier I saw a green woodpecker fly past. I thought I saw one a couple of weeks back too. During the first few months of owning The Brambles there was a resident female woodpecker. It used to spend hours on the lawn eating ants, and we do have a lot of ants! Since then we've not really seen any. Briefly saw a male one, then nothing. Speaking to my neighbours they had more recently seen some. I assume they are still around, just not so brave as to dine on the lawn! Up the wooded bit at the back, where I can't see much of the ground there are even more ants. So hopefully they still visit up there instead.

I used a mixture of Dawn Inskip digital kits to create my log book and I'm loving using them :)

Hello :) I can't believe it is Sunday already! And time for my latest post from "The Brambles". Everything is all very similar to last week, but we were treated to the sound of an owl screeching last night! 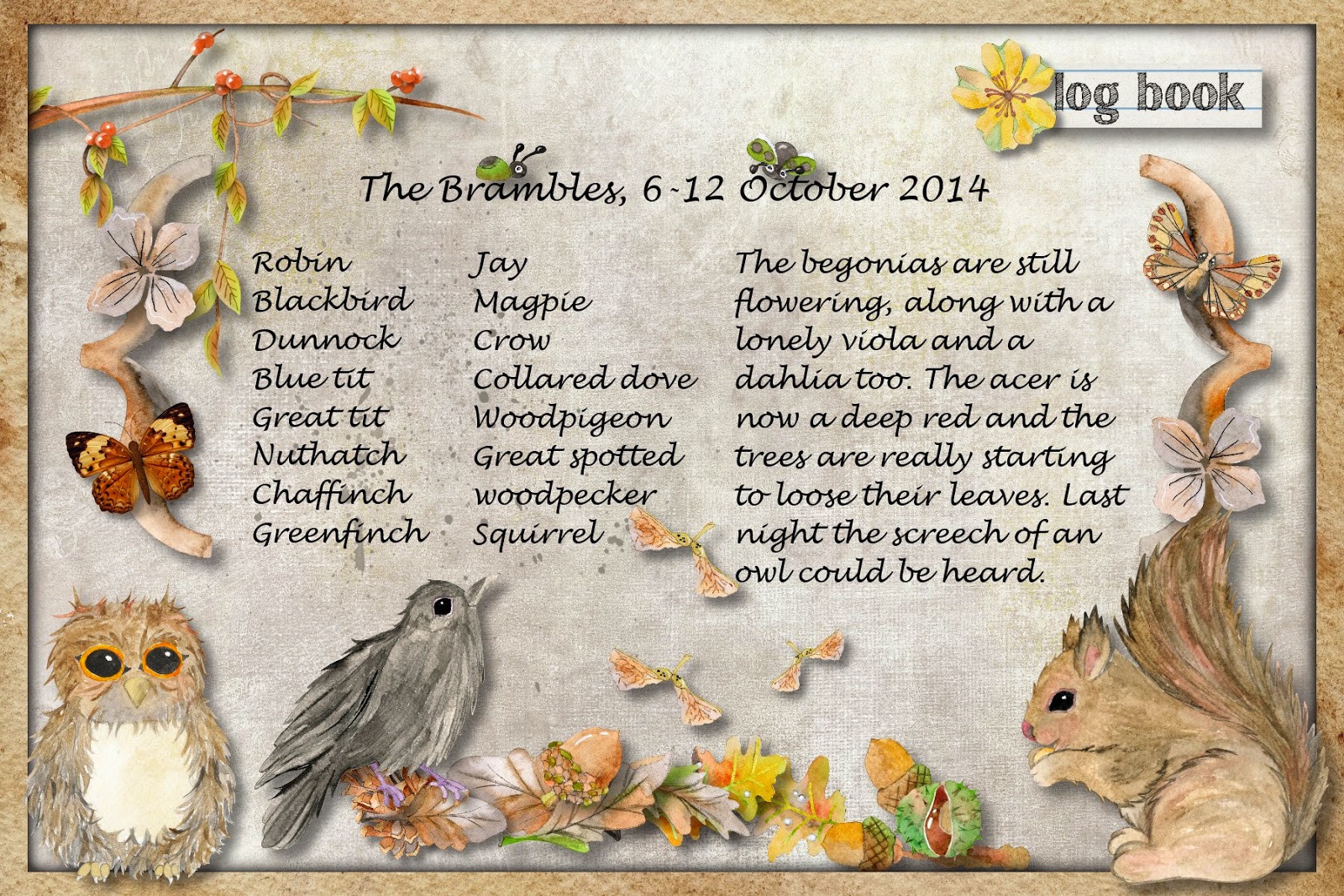 I think The Brambles is the Sunday morning breakfast location for the Greenfinches. They were in again today. Lots of them, on all the feeders and waiting in the trees and bushes for a spare 'table'!

No part of the garden, I am sure, has been left without something buried in it! The whole of the front 'lawn' must be full of nuts, just under the surface! Those busy squirrels just don't stop!!! I look out onto the front garden whilst I am scrapping/blogging/crafting and it seems like I am constantly watching one squirrel or another hiding nuts of various kinds.

Please don't be too shocked but today I have a photo :)

If you've been across to my The forget-me-not blog you will know that I am having a play with camera apps at the moment. Check out my latest post: ScrapWithApps. Here is a photo I took today in the garden using my phone camera with an app.

It's weekly post time and this week is the start of my new log card for displaying what I've seen in the garden. 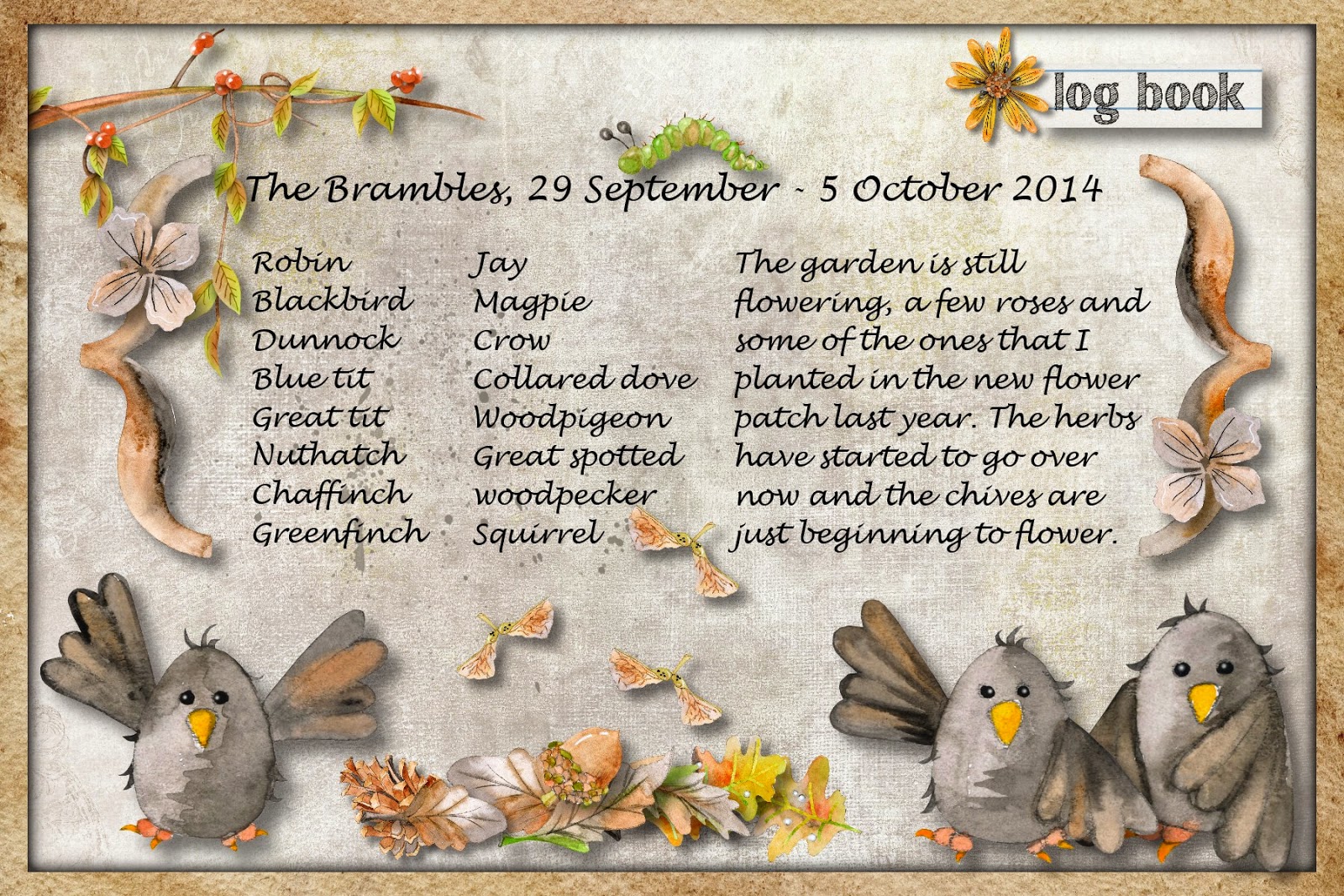 I've used Roots and Autumn Collection by Dawn Inskip for today's card. They are lovely digital scrapbooking kits and I'm really pleased with how it's turned out :)

This morning the garden was full of greenfinches, they were everywhere. Four just on one seed hanger, it's a good job they are quite social birds! I guess there were probably about twelve of them milling around.

The magpies are around all the time, and there are lots of them too. They are a real mob! I call them a mob of magpies, but when I looked it up according to one source they are called a tiding of magpies - and another source had a few other options too, congregation, charm, flock, gulp, murder, tittering and tribe. I prefer my version!!! None of the other birds get a look in with the food when they are around.

There has been a lot of bathing going on this week and the "drinking" facilities have been in constant use!

There are still lots of great spotted woodpeckers. Every time I look out on the back garden there is at least one in, and often two. I think that the numbers have been increasing since in the last couple of years.

Unfortunately I found the remains of a dead chaffinch on the lawn this week :( Just a few tail feathers and skull.

I'll be back next week with more about what has been going on at The Brambles :)